It’d be wrong to let the birthday of our nation’s greatest playwright pass by without comment, so here’s my little nod to the great man.  My edition of Shakespeare’s complete works is the oldest book I own, and by far the most precious, and I wanted to share it with you today.

It looks, feels and smells exactly how you’d wish an old book to look, feel and smell; every physical book evokes some kind of emotional response but to hold this is to feel as if you’re in contact with another era.  I’ve scoured the pages and can find no publication date printed anywhere, which is a bit of a shame as I’d love to know, but it goes back without a doubt to at least the first half of last century as it was given to my maternal grandmother by my great-grandmother on her 21st birthday.  It’s that family connection that gives it a value unlike any other book I own.  The idea of a precious book being passed down through generations of women in my family makes me feel warm and fuzzy inside – I hope one day I’ll be able to pass it on again in turn.

And if you were to envisage the quintessential complete Shakespeare in your head, I’m pretty sure it would look something like this.  From the leather cover to the gilt-edged pages, to the wonderful, magical photographs of bygone actors and actresses in their Shakespearean garb, it’s absolute book-perfection.

As if you needed reminding, this month sees the 400th anniversary of Shakespeare’s death.  It’s a pretty safe bet that there will be hundreds, if not thousands of bard-related blogs and articles popping up over the next few weeks, so I thought I’d get in nice and early and share with you some of my favourite Shakespeare-themed things!

Favourite Shakespeare play – undoubtedly “Macbeth”, as I think it’s the most powerful and striking one that I’ve seen performed.  I’ve been lucky enough to be in the audience for quite a few different versions, ranging from the traditional to an extremely physical interpretation that took place almost entirely on a giant pyramid constructed from ropes, and I’ve taken something new away from it every time.

Favourite character – I guess it should be Juliet really seeing as I’m named after her, but as my second choice I’m going to go over to the dark side and pick Lady Macbeth, surely one of the most gloriously terrifying women you’ll ever see on stage.

Favourite film adaptation – there was a point in my life when I was watching Kenneth Branagh’s “Much Ado about Nothing” with alarming regularity (I think it may have been something to do with Keanu Reeves in leather trousers…).  However, if I’m allowed to broaden the definition slightly to include modern retellings of Shakespeare’s stories then I’d have to plump for “10 Things I Hate about You”, which takes as its inspiration “The Taming of the Shrew”.

Favourite factual Shakespeare book – “Will in the World” by Stephen Greenblatt is without doubt the best one I’ve read when it comes to examining what we know of Shakespeare’s life in the context of his time.  It packs in an enormous amount of information while remaining completely readable.

Shakespeare in fiction – “The Tutor” by Andrea Chapin is a page-turning imagining of a passionate love affair between a young William Shakespeare and the woman who becomes his muse.  In a completely different take on history we have the jaw-dropping linguistic triumph that is Ros Barber’s “The Marlowe Papers”, a novel written entirely in verse that plays with the idea of Christopher Marlowe being the real playwright behind the name “Shakespeare”.

Favourite Shakespeare quote – it’s only right that the great man himself should wrap up this blog post in his own words:

“….We are such stuff as dreams are made on; and our little life is rounded with a sleep.”

If you’re interested in all things Shakespearean there’s a really interesting blog you might want to visit that explores the world of the bard and his contemporaries, Standing up for Shakespeare.

As for me, writing this has made me keen to go and see another Shakespeare play, so I’m off now to see what I can find!

A few days ago on Girl, Reading I shared some of the books I’m hoping to find in my stocking this Christmas.  However, as I was making myself a cup of tea in my Julius Caesar mug this afternoon, a memento from a trip to The Globe last year, I realised I’ve only just scratched the surface.  Being a book lover doesn’t stop at books: there are so many literature-related treasures out there to be had (many of which have already found their way into my house it must be said) that there’s now a whole new dimension to being a bookworm.  Nothing (apart from a new book of course) beats that nerdy thrill of finding a mundane object that’s made unbelievably desirable by the addition of a literary quote!  I certainly don’t need any more mugs/bags/fridge magnets with bookish references printed on them, but it’s pretty much a given that more will be added to the collection before too long.  Many of these items manage to be great fun whilst also being totally pointless – when in Stratford last I had to fight very hard to resist the pull of a rubber duck with Shakespeare’s head – but at least I can claim that the “Once more unto the breach, dear friends” magnet on my fridge door provides me with a bit of motivation every morning before a day at work.  Some of my favourite things ever have to be the Penguin classic cover mugs and tote bags.  I’m already the proud owner of a Virginia Woolf Penguin mug, an extremely well-judged secret Santa gift, and it seems only right that there should be a bag to go with it…

So yes, part two of my Christmas wish-list is very simple.  If it has a book quote, illustration or even just a book title on it, I’m going to love it.  And the rule is, no matter how much tat – sorry, sophisticated literary homeware – you own, there’s always room for more. 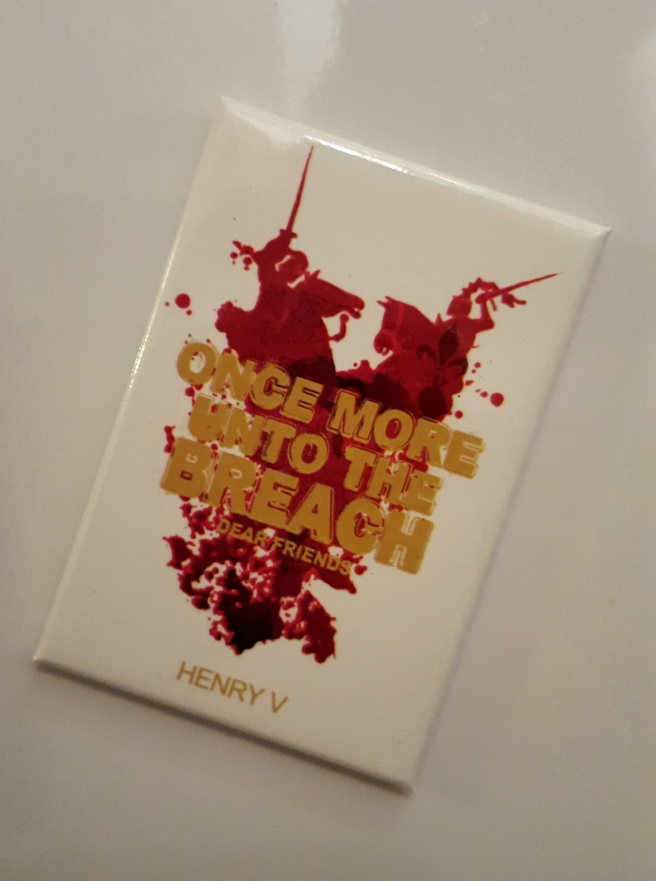