Thrillers can be challenging books to review as it’s so difficult to talk about them without inadvertently giving away plot spoilers and ruining the suspense of the story.  Be assured though I’ll do my best to give you a meaningful blog post without revealing too much!

I’m one of the ever diminishing few who hasn’t read Paul Hawkins’ astonishingly successful debut novel “The Girl on the Train”, and in a way I’m quite glad about that as it meant I came at this novel with no expectations and could read it without making any comparisons to her previous work.  It’ll be interesting for me to hear, as more and more people read “Into the Water”, whether the prevailing opinion is that it’s a better or worse book than the first.  All I can say is that for the most part I found it a really enjoyable and memorable thriller, even if there were a few elements that didn’t quite convince me.

At the centre of the story is a patch of water known to locals as the Drowning Pool.  On summer days it’s a magnet for children to play and teenagers to congregate, at other times it’s a picturesque spot for solitude and contemplation; but despite its beauty it can never escape the negative associations that have developed over the centuries due to the number of women who have perished in its depths.  Some of the earliest victims were those suspected of witchcraft who were deliberately drowned, and they were followed in turn by other violent deaths – murders, suicides and some cases where the truth of events still remains a mystery.  The latest woman to come to an unfortunate end in the notorious pool is Nel Abbott, single mother to a teenage daughter Lena, and the estranged sister of Jules, who reluctantly returns to their childhood home to sort out Nel’s affairs.  The two haven’t spoken for years following a dramatic falling-out, and Jules’ initial reaction is to resent her sister’s suicide – for that’s what most people seem to believe it was – as a final, spiteful bid to attract attention and drag Jules back to a place she hoped to have left behind for good.  Before long though the question upon which so many mystery stories have hinged over the decades – did she jump or was she pushed? – rears its head and the investigation to uncover the truth begins.

The story hops between the aftermath of Nel’s death and the events that led up to it, and is told through a multitude of voices: members of Nel’s family, the investigating police officers and an extensive cast of local people who were connected to Nel in some way.  At first I wasn’t sure I liked having such a large number of narrators; it takes a while to feel a connection to the characters when their contributions are so fragmented.  As the novel progressed, however, I found the technique began to work really well.  Nel, it transpires, had created a bit of a stir among her tight-knit, somewhat insular rural community with her controversial project on the history of the Drowning Pool, and the short, sharp bursts of narration from the different voices perfectly reflects the frenzy of circulating gossip, speculation and suspicion that follows her death.  It also ensures that the book gallops along at a pretty brisk pace, and I found myself failing miserably to put it down, constantly thinking, “just ONE more chapter”!  I’ve abandoned a few psychological thrillers over the past year because although they were fast-moving and intricately plotted I simply didn’t care what happened to the main characters, but in this case I absolutely did.  That’s not to say they’re all likeable (in fact there are a few who I found hideous) but somehow I was still desperate to find out how their stories ended.

It was the tying up of all the different story strands that I felt let the book down slightly.  I would never have guessed the outcome of the mystery surrounding Nel’s death, and I was pleased to have been taken well and truly by surprise.  The story arc for a couple of the other characters though I didn’t buy.  [Small spoiler alert!]  Following a melodramatic and for me unbelievable event in the later stages of the book, one person suddenly undergoes what appears to be a complete personality transplant, which I felt was a jarring attempt to bring closure to a situation that was far too psychologically complex to ever have been resolved in that way.  I was also left with a few unanswered questions after the final page, although that could be down to my personal preference for neat endings and a deliberate decision by the author to leave some things ambiguous rather than any oversight on her part.  Whatever the novel’s minor flaws, Paula Hawkins certainly knows how to tell a gripping story, and for its compelling narrative, excitement and genuine mystery I’d recommend it wholeheartedly. 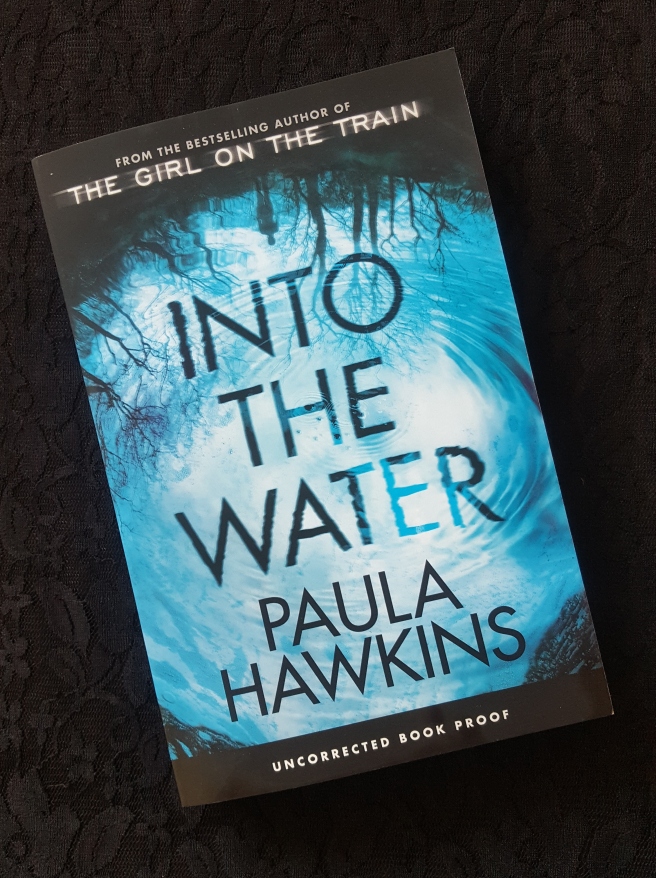 I got a bit optimistic the other day and decided that since the sun was out and there wasn’t a cloud in the sky then it must be warm enough to sit and read outside.  Not quite unfortunately; more a case of April doing that sneaky thing it does where it lures you into believing it’s summer a few weeks prematurely.  Whether I end up indoors or out though, there are some interesting books on the reading pile this month.  I realised (again) how much I love my job a week or so ago when I got given a proof copy of “Into the Water”, which I’m sure I don’t need to tell you is the next novel by “The Girl on the Train” author Paula Hawkins.  By rights it shouldn’t be featuring in a blog post about April TBRs as I’ve actually finished it already – but I couldn’t not mention it as it will surely be one of the biggest novels of this year.  I’ll save my thoughts for the review, which I’ll probably post nearer to publication time, but if you manage to get anywhere near a copy then grab it and don’t let go.  I’m super-excited about “In the Name of the Family” by Sarah Dunant, the next in her series of novels about the Borgias (I say series but I have no idea whether there will at some point be a third!) as I thought the first, Blood and Beauty, was pretty much everything you could want from a work of historical fiction.  I’ve also just started “4 3 2 1”, the Paul Auster doorstop, and I have to confess, although I very much enjoyed the opening chapters I haven’t as yet got much further.  This isn’t a reflection on the book I don’t think, more the fact that it’s quite a hefty thing that I suspect is going to require a reasonable amount of concentration and I haven’t really been in the headspace for something like that for a while.  Last up, because I always like to have some non-fiction on the go as well, is an intriguing book I came across completely by chance in a local bookshop.  “Selfish, Shallow and Self-absorbed: Sixteen writers on the decision not to have kids” is a collection of essays on, well, exactly what the title says.  I’ve always found it interesting that conversations around childlessness are still something of a taboo, even in our increasingly open society.  Well, that’s not quite true: potentially hurtful comments directed towards a woman without children about her lack of mother-status don’t seem to be taboo at all, but for a woman to respond and discuss the reasons for it is still, in my experience, looked upon with surprise, lack of comprehension and often, sadly, unfair judgement.  I was interested to see that this book existed at all, and am very much looking forward to reading a variety of opinions on the issue.

As ever there will be more reviews up on Girl, Reading soon, but in the meantime enjoy the sunshine and enjoy whatever you’re reading! 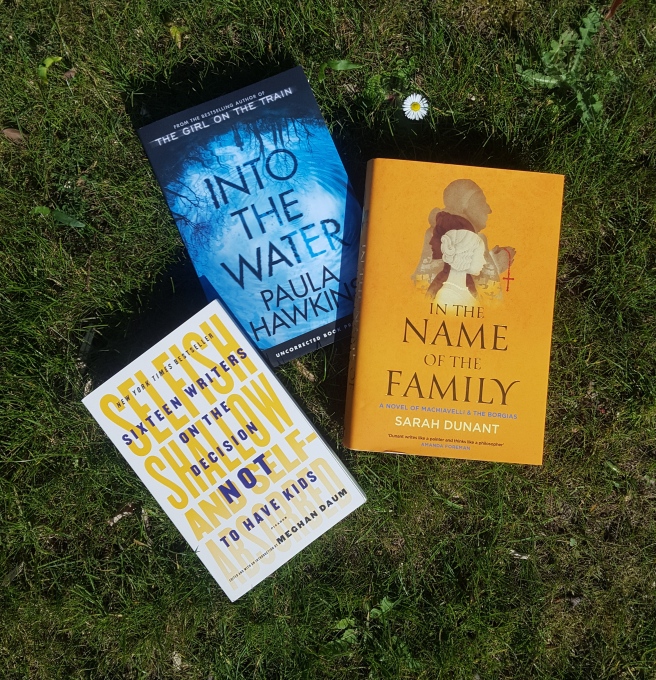