A few days ago I came across a blog post by Amy from Curiouser and Curiouser talking about the books she’d been reading as part of the 2020 Japanese literature challenge, hosted by Meredith at Dolce Bellezza.  The idea was to read and review fiction originally written in Japanese between January and March this year – sadly, I’m a bit late to the party as regards taking part in the challenge, but I hope both bloggers will forgive me for using it as inspiration to share some of the Japanese novels I’ve been reading over the past few months.  When I started thinking about it I realised there were quite a few!  Here are some of the ones that have intrigued me the most….

The Forest of Wool and Steel – Natsu Miyashita

This novel tells the story of a young piano tuner and his lifelong quest to master his craft.  Not a virtuoso player himself, he nonetheless has an astonishingly acute ear for the different tones and styles in which his clients play, and sees it as his calling to tune each piano according to the unique needs of its pianist.  He develops a particular fascination with a pair of twins, Kazune and Yuni, both young prodigies but both completely different in the way they communicate through their music, and it’s this relationship dynamic that provides the novel’s backbone.  I really loved it; it was such an unusual subject matter, and even during the more emotionally intense moments the writing maintained an air of poise and gentleness in  keeping with the finesse of the music that it described with so much colour.

I’m not a huge crime person, but I do love Keigo Higashino’s crime thrillers.  His characters are always utterly believable and very well rounded compared to some thrillers I’ve read where the supporting cast is pretty two-dimensional.  This is one of the books that features his recurring character, the physicist Yukawa – a slightly unlikely-sounding protagonist but one who nevertheless has a natural instinct for investigation and crime-solving.  The Devotion of Suspect X is still my favourite of Higashino’s novels so far I think (although it’s a close call) but this is still extremely enjoyable, and the story has an interesting – and relevant – environmental theme running through it, as naturalists and environmental campaigners go head to head with a development company hoping to gain a foothold in a fading coastal resort town, with inevitably fatal results!  Even if you don’t think you’re a crime fan, I would definitely urge you to pick up one of Higashino’s books and give it a try. 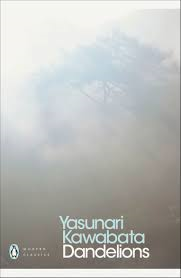 Honestly, I can’t say I particularly enjoyed this book, but I’ve decided to include it here because, if nothing else, it’s memorable for its strange plot and surreal atmosphere.  A fun read it may not be, but it sticks in your head afterwards nevertheless.  The story centres around a young woman who has developed selective blindness; in the beginning, she found a ping-pong ball disappeared inexplicably from view, and now she is unable to see her fiancé.  The book begins as her fiancé and mother leave the asylum in which the girl has been placed, and follows them over the subsequent day and night as they discuss her mysterious affliction.  That’s pretty much it in terms of plot: the whole book is essentially a conversation between two people with sometimes coinciding and sometimes conflicting ideas of what this bizarre occurrence means.  I’m sure there’s some thought-provoking philosophical stuff buried amid the peculiarity, but I found it hard to engage with and finished the book feeling I’d probably missed the point.  If you want to try something unusual though (and short – it’s only 132 pages, although even that felt long at times!) then there’s weirdness here in spades.

It was the stylish cover art that first drew me to this book, but the inside was just as fabulous.  It’s narrated by a ghost – although if that sounds too much like a gimmick, don’t let it put you off; the effect is so subtle that it becomes simply the tale of a man looking back on his life and watching a familiar world warp, change and disappear.  It’s a delicate and skillful combination of the tragically sad and exquisitely beautiful, as the narrator takes us through his experiences of love, death, homelessness, friendship and loneliness, all against backdrop of a changing Japan that feels like a living, breathing character in its own right.  I think if I had to pick one out of all the books I’ve talked about in this post, this would be the one I’d recommend you read.

Thanks for reading – I’d love to here about any Japanese fiction you’ve read recently, or if you’ve read any of these, what did you think?