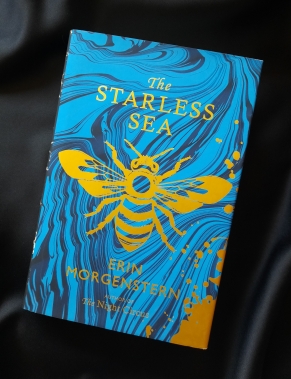 It’s been years since I read Erin Morgenstern’s first book, The Night Circus, but I still remember how I fell head over heels in love with it.  She became one of those authors whose subsequent books you yearn for and then, when they finally appear, it feels like birthday, Christmas and new year rolled into one.  I was hugely disappointed, then, to have to admit that The Starless Sea just didn’t live up to its predecessor.

The premise sounded like it would be right up my street: a magical, underground world that acts as a kind of sanctuary for stories comes under threat and the main character, Zachary Rawlins, guided by a cast of enigmatic characters, must fight to protect this labyrinthine library and stop it from being destroyed forever.  And it should have been exactly up my street: I was captivated by this world that held the loves, losses, dreams and secrets of a million long-forgotten souls in the form of their stories, and I really took to the character of Zachary, the slightly geeky loner who doesn’t ever seem to quite belong.  The trouble was that, for at least half the book, I didn’t get to spend nearly enough time in either’s company.

Zachary is set on his quest to find the Starless Sea and save the world of stories by the discovery of a mysterious book, which contains a number of weird and – to start with at least – unfathomable folk tales, fairy stories and legends.  What I found problematic was that for the first half of the novel, the chapters following Zachary’s journey are interspersed with stories from his newly-discovered book; some of these are fairly entertaining tales in their own right, others less so.  Every now and then yet more fragments of story pop up,  introducing (in the most oblique terms) other characters both from our own world and the subterranean story realm.  It’s pretty clear when you’re reading that these multiple narratives are somehow going to interconnect at some point, and I was prepared to go with it on the basis that all would soon be revealed, even though I found the constant hopping about quite frustrating.  Thankfully, once you get past the half way point the novel focusses in much more consistently on Zachary’s story, with far fewer diversions into another character’s story arc, and it’s at that point I felt it became a better book.

There were definitely some things here to like.  I loved Zachary’s companions Dorian and Mirabel; like Zachary, both were very finely drawn and their individual journeys turned out to be quite moving.  In fact, the book as a whole has a palpable sense of sadness flowing just under the surface, always there in a barely definable yet somehow unmissable way.  I actually think that creating and sustaining this atmosphere was the novel’s cleverest achievement, but I get the feeling you’re meant to come away feeling that the smartest part was tying all the different strands together.  Trouble was, by the time I got to the end I wasn’t entirely sure I’d found a place for all the pieces – the significance of many of the fairy tales and snippets of story that appear in the first half of the book becomes clear as the novel progresses, but there were still some I looked back on after I’d finished reading with a bit of a “but what was that bit all about?” feeling.  And it’s very magical; I tend to prefer magical realism with the emphasis on realism – but that’s a purely personal preference rather than a criticism.  In fact, I’ve talked to someone else who really enjoyed the fairy tales and digressions of the novel’s first half and was disappointed when the narrative became more straight forward!  Proof, if any were needed, that it’s all a matter of taste.

Would I recommend it?  If I’d read this one first I have to say I wouldn’t have gone on to read The Night Circus, but if you like full-on magic then it’s probably worth a try; and if like me you find it a bit tough going initially, it’s worth persevering for the excitement of the story in the second half.  Not my favourite book of recent times, but I’d be very interested to hear what you think if you’ve read it – perhaps you loved it?  Let me know!

3 thoughts on “The Starless Sea by Erin Morgenstern – review”