When you start reading “The Little Red Chairs” you feel as if you’re embarking on a gentle tale of a small Irish community’s gradual enlightenment brought about by the arrival of an enigmatic stranger.  A mysterious man from the Balkans sets himself up as a spiritual healer specialising in sex therapy, and as with Joanne Harris’ “Chocolat”, the notion of an outsider subverting the traditions of an insular Catholic community causes consternation among some, and guilty curiosity among others.  Don’t be fooled.  Before Edna O’Brien is done with you, she’s going to drag you to some very dark places indeed, and the languid, almost wistful tone of the opening pages will seem a world away.

If you read the author’s brief but ominous introductory note before the story begins, you’ll get an idea of the territory this novel is going to cover.  She explains that the red chairs of the title were actually part of the 2012 twentieth anniversary commemoration of the siege of Sarajevo by Bosnian Serb forces.  Each chair, laid out along the city’s main street, represented the life of someone killed during the siege, 11541 in total.  It’s not giving too much away to say that the somewhat bizarre Eastern European gentleman who turns up in Cloonoila, Ireland, is going to open the inhabitants’ eyes to a part of history, and part of the world, that up until now seemed utterly remote and inconsequential – but the nature of his connection to the events that provoked the forlorn display of little red chairs I would never have guessed.  Before too long the past catches up with the present and life for many in Cloonoila will never be the same again; for one character in particular, Fidelma, the events that follow the stranger’s arrival will divert the course of her entire future.  When we first meet her, she is living out a hollow existence, in a marriage under strain from the age difference between herself and her much older husband, and longing for the child that has never come her way.  She’s a reserved and unassuming woman, and we pity her almost immediately as one of those sad figures whose life hasn’t turned out the way she hoped or probably deserved.  It’s all the more tragic, then, that her very vulnerability makes her the one who ends up getting involved more intimately than any other in the intrigue surrounding newcomer Vladimir.  It’s a scenario that doesn’t end well.  The story’s crisis point is an event so unbelievably horrific that I was forced to step away from the book for a while; it was truly one of the most disturbing passages I’ve ever read and it will prey on my mind for a long time to come.  However, it’s a credit to the author that she’s able to depict a scene as hideous as this and still bring the reader with her.  Horrified though I was, there was never any question in my mind as to whether I wanted to carry on.  If you do continue you will be rewarded, as for me the novel becomes richer and deeper the further it goes on.

The latter half of the book is both fascinating and exceptionally clever as it both narrows and broadens its focus at the same time.  One the one hand, the author chooses to leave many of the earlier characters behind and concentrate on Fidelma and the path her life takes as she attempts to come to terms with everything that’s happened.  On the other hand it’s at this point that the novel really embraces what turn out to be its key themes by moving the action out of the isolated town of Cloonoila to London, and thus to an infinitely wider world of people who are fighting their own battles in ways that Fidelma couldn’t have imagined.  The idea of how established communities view outsiders was hinted at in an almost whimsical way at the start of the novel, with gently comical scenes ensuing as the local priest delicately tries to address the Church’s concerns over “sex therapy” with the new arrival and a nun surreptitiously visits his massage room.  By the book’s later stages the notion of the outsider has taken on a much more serious tone, and the expanding cast of characters who flit in and out of the action open the reader’s – and Fidelma’s – eyes to what it really means to be on the fringes of society.  For some it’s about having acted in a way that contravenes society’s rules, for others it comes in the form of racial abuse, and for some it’s the isolation that comes from being thoroughly immersed in a grief and pain that no-one else can comprehend.  Most crucially, though, it’s about the people from all corners of the world who have come to London seeking a refuge from lives more terrible than most of us will ever experience.  The truth is that there are streets in every part of the globe that would more than warrant their own row of little red chairs.

I’m aware that this is starting to sound very much like an issue-led novel, and if your eyes are glazing over at the thought of an author on a soap-box for two hundred pages then let me assure you it doesn’t read that way at all.  Yes, it’s undoubtedly a very timely novel considering everything that’s been filling our news bulletins over the past several months, but it’s also an incredibly intimate examination of one woman’s trauma and her journey back to some kind of inner peace.  The author’s genius lies in this masterful balance of a broader message with minutely observed personal detail, and the quality and bravery of her writing have marked her out in my mind as a novelist I want to pursue further.  It’s not an easy read to be sure, but immensely rewarding and utterly deserving of all the plaudits it’s received.  Steel yourself – but read it. 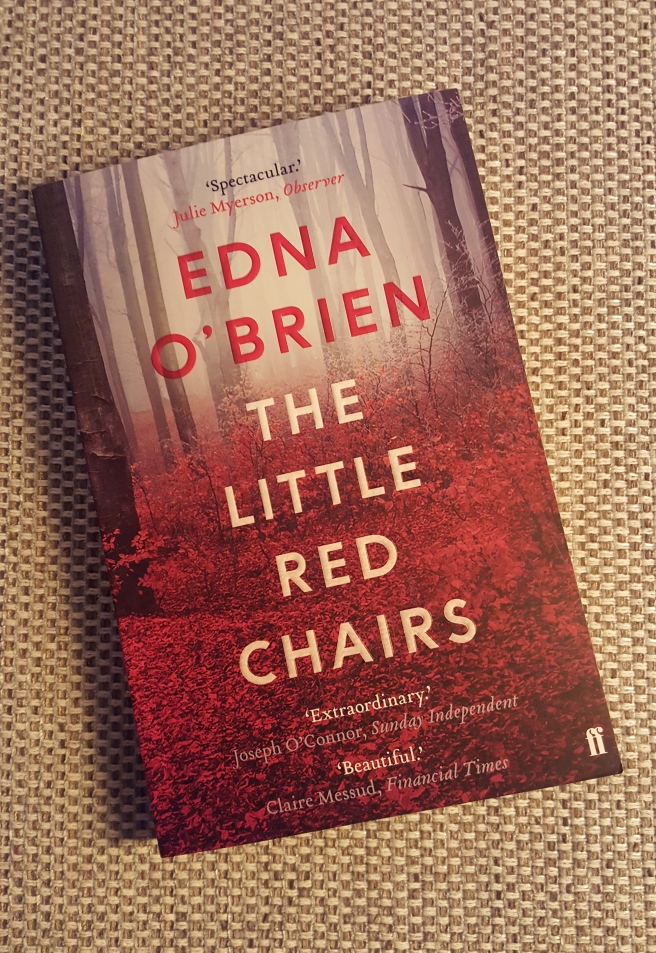