With less than five weeks to go until Christmas (eek!) I think it’s time for the list of books I’m hoping to find under the tree this year.  Appropriately, this blog post is brought to you from under a blanket as it’s flippin’ freezing tonight!  Gets me into the wintery spirit though I suppose…

“The Little Red Chairs” by Edna O’Brien – I was discussing with someone only the other day how surprised I am at myself for never having read any of her books.  I very rarely buy fiction in hardback but if this was to wing its way to me via Santa’s sleigh I would be absolutely delighted!  The synopsis promises a novel of real depth; the cover alone sends a shiver of anticipation down the spine.

“The Angel Tree” by Lucinda Riley – I may be wrong about this comparison as I’ve never read her before, but from appearance alone I’ve always suspected Lucinda Riley’s novels would be somewhat Kate Morton-esque.  I don’t think the story is anything to do with Christmas, but nevertheless the magical snow-filled cover is enough to make me feel it’s the perfect time of year to read it.

“The Fox and the Star” by Coralie Bickford-Smith – I’ve had a read of this already (it’s a picture book so doesn’t take long!) and it’s one of those childlike yet profound stories that brings a lump to the throat.  The artwork is plain but powerful and the whole design flawless; it’s quite simply a beautiful object.

“1606: William Shakespeare and the Year of Lear” by James Shapiro – I’ve got quite a number of Shakespeare-related books at home, but why not have another one?! “Contested Will” by the same author was a really interesting read and I don’t doubt this will be just as good.

“Weatherland” by Alexandra Harris – how amazing does this sound?!  This unique take on our cultural history explores the peculiarly British obsession with the weather through its portrayal in art and literature down the centuries.  A quick flick through the roll-call of creatives featured here – Austen, Keats, Turner, Milton – has me salivating already.

There are so many more books I could add but I wouldn’t want to seem greedy!  I’d love to know what’s on your Christmas wish-list this year. 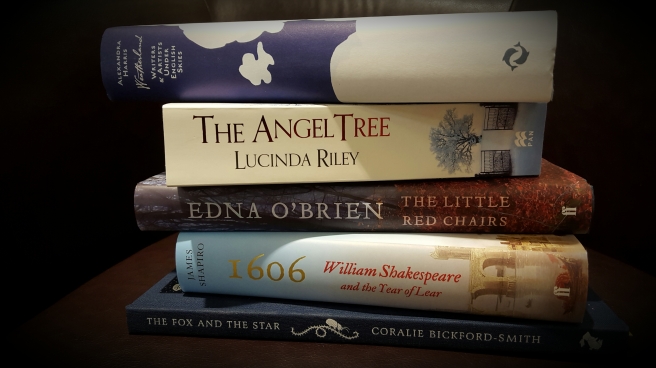